in these dark times

each of us must find our own light in order to survive. when I get depressd I write or swim or see a film. & lately I have a new life as a model. strangely since my 75th birthday photographers have been getting me out of my clothes. there have been memorable shoots with Eric Schwabel & Tyler Alpern. & yesterday Mud Baron joind my list.

he is famous for photographing people with flowers. yesterday he set up shop at Ocotillo Lodge -- one of the locations for the Troy Donahue film "Palm Springs Weekend" & a property once ownd by Gene Autry whose guests have included JFK & Marilyn as well as Betty Grable & Doris Day. Mud put together a gathering of male models for "Boy Bloom." altho it's uncertain abt the fate of this project it may end up as a charity calendar.

as soon as I slippd off my pants Mud askd me to unfold myself on a bed of flowers beside local realtor Will Paine. "put yr head on his left nipple" he instructd.  then Arizona masseur  Bryce Hansen was askd to put his head on Will's right nipple. 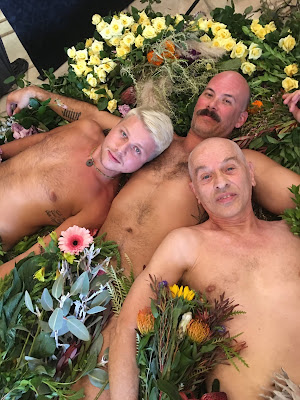 after this it was time for my solo shot. during that Mud made this little video which I didn't know was being filmd.

Posted by Alex Gildzen at 10:06 AM No comments:

the rape of a nation

the world is laughing at us but assault isn't funny.

this obese man with paintd face & grotesque hair grabs us by the genitals & won't let go.

the legitimacy of his office is suspect but he plows on. he has the opposite of the Midas touch. everything golden that his little hands finger tarnishes.

he plunders our coffers & gives power to his evil spawn. he surrounds himself with venal sycophants who poison the environment for personal gain & put children in cages & mock education & lie. now he seeks to elevate to our highest court an intemperate judge who obfuscates & screams conspiracy while our Congress of cowards applauds. in 2 years he has creatd such damage that it will not be fixd in my lifetime.

& what way out of this morass? a ravishd nation cowers in a lockd bathroom waiting for a stairway to freedom.
Posted by Alex Gildzen at 10:32 AM 2 comments:

another Palm Springs gay film festival under my belt. this time I went to 12 screenings in 3 days & a nite.


Posted by Alex Gildzen at 1:16 PM No comments:

Posted by Alex Gildzen at 8:20 AM No comments: