Posted by Alex Gildzen at 11:51 PM No comments:

his campaign probably began because he was mad at Obama for ridiculing him in public. from the beginning he was a clown. but as his lack of knowledge became clear & his bullying turnd into hate the whole campaign was a joke. but the leaders of the Republican party allowd him to continue.

along the way the stand-up comic turnd out to be a sociopath. still too many of his party leaders supportd him. he didn't begin to get any real critical examination until he reveald himself to be a sexual predator.

however yesterday was simply too much even for Trump. it's not just that he has no decency it's that he doesn't even know what decency is. he is the most dangerous person to run for the presidency in modern times.

& perhaps the biggest tragedy of this election is that predictions are he will get 50 million votes.

in Palm Springs it takes til oct to begin cooling down. & with that comes more activities.

tonite was the first artwalk in the Backstreet art district. of special interest to me was the opening of Tom Ross Gallery which for years had been on Canyon Rd. the vibe at all the galleries was exciting & did remind me of those first days I lived in Santa Fe. 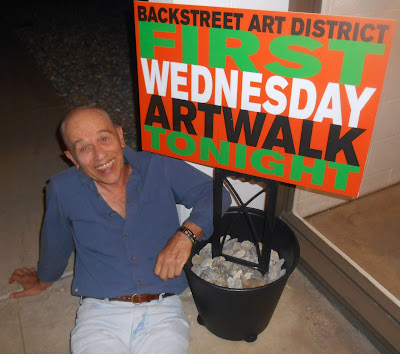 Posted by Alex Gildzen at 10:17 PM No comments: