in some ways William Como was the successor to Daniel Blum. he didn't produce books but his magazines were as vital in their day.

as a young man Como studied dance & tried his hand at Hollywood. in the late '40s he became an office boy at Dance Magazine   working his way up to editor. in the late '60s he began After Dark   which was calld "a national magazine of entertainment." like Blum before him   Como rarely found a picture of a young man wearing very little that he didn't like. this may have been the first mainstream magazine aimd at a gay audience. I first subscribd in early 1969. thruout the following decade all my friends read it. when poems of mine appeard in its pages in 1976 I had more response than I did from any of the little mags I'd been in. 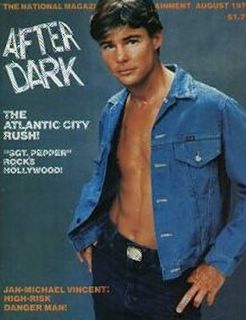 In it's time, this was the only regular source for tasty images of beautiful men; something that's almost hard to believe today when there are so many sources. The gay references were all well below the mainstream cultural radar; it was like belonging to a secret club and I think it gave many gay men at the time their first glimpse of the fact that there were a lot of other gay men in the world. I never missed an issue.

So who was on the cover of the issue in which your poetry appeared?

Paul Rudd. he was an actor who appeard nude in the Broadway play "The Changing Room" & not the actor of the same name who is cuurently in movies.