40 years ago my roommate in the garret at 334 South Willow St in Kent was Michael Chikiris. altho I followd his career over the years we weren't personally in touch. I only learnd of his too-early death yesterday.

Mike was an intense young man. already a fine photographer. shortly after he mov'd in I went to a long exhilirating lecture by Buckminster Fuller. when I returnd I was completely engrossd in writing a poem in an attempt to capture the experience. Mike pickd up his omnipresent camera & shot a series of me writing. I believe one appeard in the university yearbook Chestnut Burr.

the only Chikiris photograph in my art collection is this portrait of our friend Cynthia Mayer: 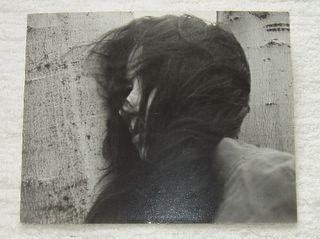 after graduation Mike became a staff photographer on the Pittsburgh Press. in the early '70s he shot 3D images of the Pittsburgh Steelers (inc Kent State's Jack Lambert) for View Master. at the same time he became a friend of & driver for Stan Brakhage while the filmmaker shot his Pittsburgh trilogy. Mike appears in some late Brakhage films & fatefully died the day after the filmmaker.

Mike remains well-known for his portraits of writers as various as Ginsberg & Updike & of experimental filmmakers such as Hollis Frampton & Jonas Mekas. however his nudes & other work have been increasingly collectable & are available online via several galleries.
Posted by Alex Gildzen at 12:10 AM