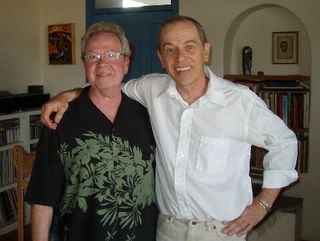 it's been many a year since the readings at The Cellar on the Kent State campus. but pleasant memories of them came rushing back when Jack Ramey stoppd by for lunch with his lovely wife Nancy Rodgers.

fresh from his triumph reading Whitman at NYPL   Jack was paying his first visit to Santa Fe. as things seem to happen with folks of a certain age   the coversation often turnd to the past.

Jack's memory is much clearer than mine. The Cellar -- long gone -- was a black-box theater that opend in the bowels of the Music & Speech Building in 1964. the theater department used it most frequently & it was here that Dennis Deal producd his early musicals. monthly open readings were held there emcee'd by either Jake Leed or Mac Hassler. in 1965 d.a. levy joind us for a reading & the campus memorial to him was held there in late 1968.

it was endearing to share Jack's recollections of some of the readers at this nearly legendary venue:

Spud Boy (whose poems were often abt -- yup -- potatoes)

Michael Glaser (who had a series of poems abt toilet paper he'd collectd on a trip to Europe)
Posted by Alex Gildzen at 12:12 AM