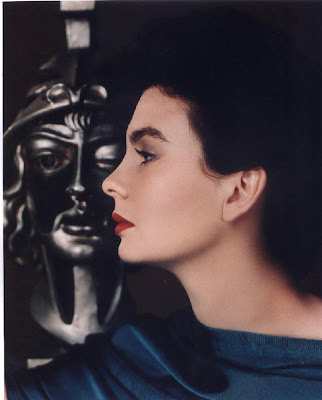 while I was in Hollywood this beautiful actress died. she was a favorite of mine when I was a boy. a poem abt her is in "Sonny's Scrapbook" which originally appeard in Court Green & was collectd in It's All a Movie. & she remaind a favorite over the decades.

she appeard in so many classic films but probably my favorite performance of hers was in the lesser-known "Home Before Dark." I regret I was unable to see her on stage in "A Little Night Music" but with the help of the album I see her as Desiree in my mind.

her marriage to the swashbuckling Stewart Granger made them the Taylor/Burton of their day. (amusingly Simmons' affair with leading man Burton was years before Elizabeth's.) & of course her struggle with alcoholism simply made her closer to me.
Posted by Alex Gildzen at 12:06 AM

my Husband saw her in A Little Night Music in London & says that she was superb.