in 2000 I did a rubbing of this plastic token for a piece which appears in Making Circles. 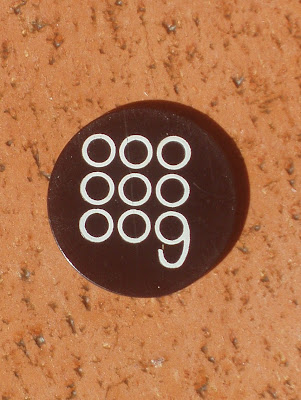 I got the token back in my drinking days. it was from a favorite West Village bar calld the Ninth Circle.

the building at 139 West 10th has quite a history. constructd in 1845 it opend as a townhouse. by 1898 it was a popular Italian restaurant. but its primary claim to fame came in the 20th century. Mickey Ruskin opend it under the name Ninth Circle as a steakhouse & bar in 1962 (3 years before he gave the world Max's Kansas City). at first it was a watering hole for artists (John Chamerlain) & poets (Joel Oppenheimer who claimd to name Max's Kansas City for Ruskin). but the place steppd into history when Edward Albee went to the bathroom there. on the mirror someone had written in soap "who's afraid of Virginia Wolf?"

I'm not certain exactly when it became a popular gay dance spot but that's how I knew it. by the '80s it was a hustler bar & then went thru a couple of incarnations before turning into its present self DeSantos   an Italian restaurant co-ownd by a Mexican rock drummer.
Posted by Alex Gildzen at 10:50 AM

didn't we once get so drunk there, that I had to leave and you didn't even know that I had left?

as you know Ira my drinking days (& more often nites)are a source of embarrassment to me. I have no doubt what you write is true but I have no memory of that particular debauch. if I made a list of all the bars we got drunk in during the 70s I'd be here all evening.

I don't think you should be embarrassed by your drinking days and nights. They were what they were, and God knows we've all had nights (and days) that we would like to forget, or maybe not.

what I do remember is a wonderful b&w photo of you in front of the Ninth Circle.

really and what photo is that? do you have it? I have no idea or memory of that.

thanks for the photo. Of course I recall it and I've posted it on facebook.