one of Mom's collections

the reason I became a collector is because both of my parents were. Dad's collections were mostly usable tools -- altho he also had some antique ones. he also had a small gathering of duck decoys.

Mom collectd everything from watering cans to ceramic chickens. but her most famous collection was autographs. 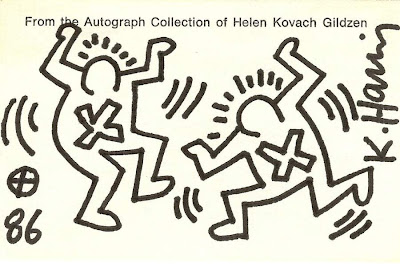 being the generous person she's always been Mom made a decision when I annouc'd my retirement as curator of special collections at Kent State University Libraries. she wantd her autograph collection to go to KSU as her own thank you to the university for employing her son. so abt a thousand autographs were boxd & sent to Kent. the gift was written abt by future novelist Thrity Umrigar in the Akron paper & was duly noted in Library Hotline.

in 1997 the library mountd a major exhibition of Mom's collection. this is the literary section where you may be able to see cards signd by Robert Creeley & Maya Angelou. 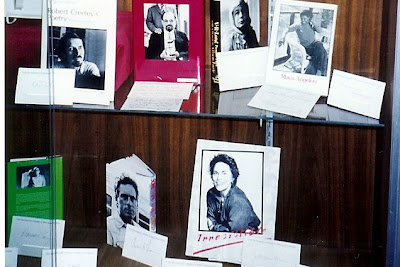 here are my parents at the festive opening of the exhibition which was attend'd by director Bobby Lewis   poet Maggie Anderson   comics artist P. Craig Russell. 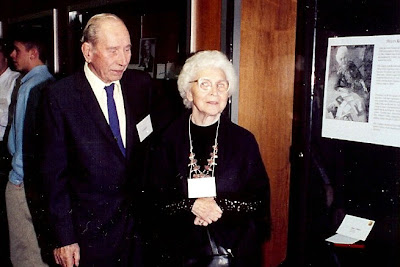 Mom's wearing her squash blossom necklace. in keeping with her lifelong spirit of giving she's willing it to Kent's fashion museum.
Posted by Alex Gildzen at 10:21 AM

Your Mother's collections sound wonderful & fun. I have collections myself, so I understand. I have never been able to bring myself to ask for anyone's autograph, but I do have a letter, written by a scribe, with Louis XVI's signature & seal. It was a gift to me from Fay Wray, who collected autographs. It is one my most prized possesions.

how lovely. Mom only had contemporary autographs. & yes she had Fay Wray.