the feeling was somewhere between rock concert & tent revival meeting. 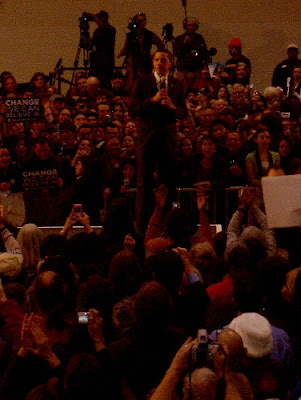 capacity at the community college gym was supposd to be 3000. somehow 3600 were shoehornd in. another 2000 remaind in the cold to listen to him on loudspeakers outside. I got there early & waitd near the front of the half-mile line for 2 hours but got a comfortable aisle seat.

when the candidate emergd the air was electric. Obama is centerd & clear & direct. he wants to change the mindset of the country & he needs our help. he wants to restore the dignity of a country the world disdains. he wants to bring battling factions together. he feels we are at a moment in history & invites us to join him in it.