notes on last week & long ago 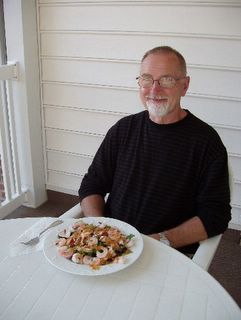 I've known William E. A. Berger for nearly 39 years. I was a grad student at Kent State. he taught art in the Akron public schools. a mutual friend introducd us. Billy also was an amateur bodybuilder & a devotee of architecture. his apartment -- like his later houses -- was tastefully put together & full of treasures.

in the '70s we went to the New Gallery together. this Cleveland institution was the child of Leo Castelli's daughter Nina & the elegant Marjorie Tallalay. we both bought Warhols there. he still has his. stupidly I gave up my Marilyn in a bitter divorce. both of us have willd our art collections to Oberlin College's Allen Memorial Art Museum. altho we'll both be dead it pleases me to think that someday a piece from his house may be exhibitd next to a piece from my house.

as circumstances happen friendships ebb & flow. there were times during these almost four decades that we saw less of each other. after retiring we each went west. Billy now resides in Culver City. he says it's Los Angeles. but his mailing address is Culver City. when I was a child I wrote to my fave MGM stars at Culver City. so that address still contains glamour for me which is why I tell everyone that Billy lives in Culver City.

last week Billy had a milestone birthday abt which he was most cavalier. I felt it requird celebration. so we spent a charming week together in South Carolina. we flew into Myrtle Beach which is quite appalling but had a place in Murrells Inlet. this small community is usually quiet but while we were there a rare murder happend. we spent a lovely day in Charleston where Billy took hundreds of pictures of architecture & where I spread out the Century Dimes. 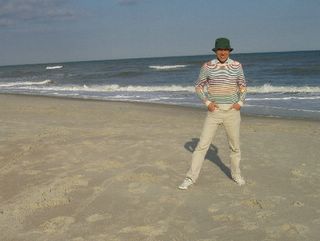 me on Huntington Beach